PROMO: throughout 2020, stays at B&B Montegallo will allow you to visit the Osimo Museum of the Toy Soldier for FREE!

The owners of the B&B Montegallo, have created in Osimo the first museum in the Marche region in which the story is told in a fun and alternative way, through the use of small soldiers as a teaching tool, to amuse the not only the youngest ones, but also their parents, to get them interested in this beautiful discipline called history.

In a charming atmosphere, you can retrace a particular historical path through miniature reconstructions, from the ancient people to the modern age, thanks to the explanations of the owner of B&B Montegallo, Gianluca Mengoni, lawyer and great scholar of history, who will guide visitors.

An ideal location, unique and absolutely exclusive to families and children guests of the B&B Montegallo!

Would you like to spend your summer holidays in Osimo and visit the Civic Gallery of Historical Figurine?
Choose our hotel, book now for a truly unforgettable experience!
BOOK NOW!

It’s name is inspired by the famous movie “Breakfast at Tiffany’s” in which the actress Audrey Hepburn was the main character.

The suite is elegant and refined, and very bright: it has 3 beds with a spacious bathroom.

The total area is 25 square meters, that makes it ideal for the stay of families.

Not to mention the tranquility of the area, far from the chaos of the city; a place where guests can relax and recover in view of their commitments!

B&B Montegallo: a Bed and Breakfast with a quality of service or premises definitely comparable to that of a guest house or hotel, but with a very affordable price, often less than most of the B & B in the area! (See services and rates) 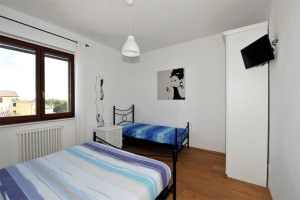 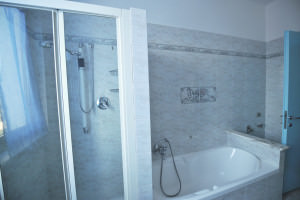 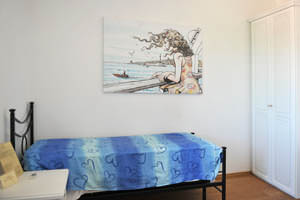 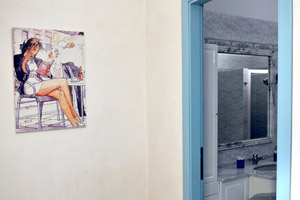 3 km from the B & B Montegallo you can visit Osimo, placed in the high of a hill overlooking the valley of the roller, a city rich in history.
“Auximum” (ancient Roman name of the city) with its massive walls was a thriving Roman colony, which hosted several times Pompey the Great and Julius Caesar, and was a witness of their clash and the end of the Republic.

Osimo today presents itself as an elegant city, rich in churches, just remember:
– Cathedral of S. Leopardo built in the fourth century in the highest part of the city and declared a national monument;
– The Church of St. Joseph of Cupertino built in 1744 in which they are admitted to the crypt and the urn of the saint;
– The Church of Our Campocavallo built between 1892 and 1913, a place of pilgrimage following the wonders of Madonna

And the many palaces, including:
– Palazzo Balleani Baldeschi built around 1890 that housed the old municipal headquarters;
– Palazzo Campana built in the seventeenth century. was the seat of the college and seminary and now houses the municipal library, the historical archive, the museum;
– Town Hall built in 1457 then in subsequent interventions, in the ground floor is the Municipal Antiquarium, a collection of tombstones, bases, headless statues;
– Gallo Palace, Palazzo Simonetti and Palazzo Sinibaldi.

A place of honor deserves the Teatro la Fenice New, opened in 1782 and then demolished for safety reasons in 1887 and rebuilt on a project. Canedi Bologna, today is a place of performances and cultural events in the city.

Osimo is also a city rich in culture with the Museum opened in 2000, the Diocesan Museum situated in the Cathedral of San Leopardo, the Museum of St. Joseph of Cupertino placed within the homonymous sanctuary and the Civic Gallery of Historical Figurine inaugurated in 2011 , in which the story is told in a fun way with the help of the soldier.

Osimo is also characterized by its mysterious caves, the Caves of Cantinone, a number of galleries and tunnels in the subsoil, it has an esoteric flavor and it is accessible for tourists today, where you can also admire engravings. Templars.

Would you like to spend your holidays in this beautiful location?
Choose our hotel, book now for a truly unforgettable!
BOOK NOW! 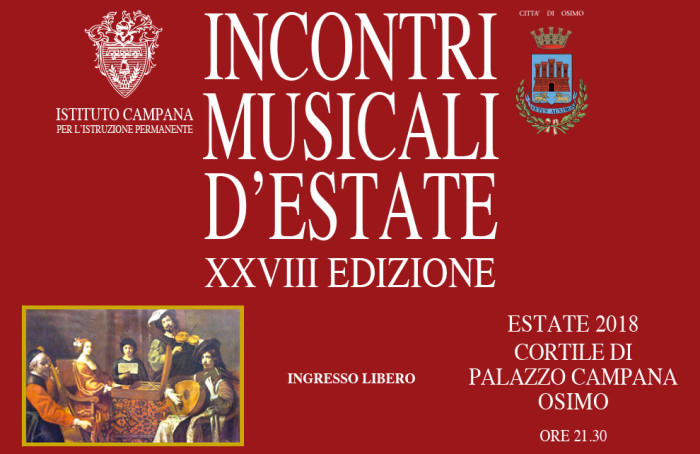 In July, the “Summer Music Meetings” exhibition organized by the Campana Institute for Lifelong Learning, which has now reached its XXVIII edition.
All concerts will start at 9:30 pm. FREE ENTRANCE – In case of rainy weather the concerts will be held at “Teatrino Campana”

Also this year the courtyard of Campana Palace will be the evocative theater for many unmissable appointments:

Thursday 19th July
“STABAT MATER” with Horns section of the of the Symphony Orchestra G. Rossini

“Giorgio de Chirico and the Neometafisica”, exhibition by Vittorio Sgarbi in collaboration with Maria Letizia Rocco, was realized thanks to the granting of the munificent loan of a selection of works by the Giorgio e Isa de Chirico Foundation.

More than 60 works are exhibited in the spacious rooms of Palazzo Campana, including sculptures, graphics, drawings and paintings that retrace the last period of artistic production of Giorgio de Chirico: the Neometaphysical

These works are characterized by a creative vein that shows an almost amused representation of the same themes proposed in the early works. The subjects – squares, interiors / exteriors and mannequins – are the same represented in the Metaphysical period, but everything, even the construction of space and colors, are able to light cognitive and empathic references of an almost ironic nature.

Here is the comment by the curator Vittorio Sgarbi:
https://www.dechiricoaosimo.it/il-curatore-vittorio-sgarbi/

Do you want to take part in this wonderful exhibition by one of the most important Italian contemporary artists??
Choose our hotel, book now for a truly unforgettable experience!
BOOK NOW!

From March 18 to October 30, 2016 will be held at Palazzo Campana in Osimo (AN), the exhibition “Lotto, Artemisia, Guercino. The secret rooms of Vittorio Sgarbi”, selection of over 120 works from the private collection Cavallini Sgarbi, exhibited for the first time in Italy. The important artistic event, curated by Pietro Di Natale and promoted by the Marche Region, the Municipality of Osimo, the Don Carlo Grillantini Foundation and Campana Institute, was officially presented at the BIT in Milan.

The works (drawings, paintings and sculptures), gathered in thirty years of activity, constitute a veritable compendium of Italian art, which highlights the unique and complex “artistic geography” of Italy and the great variety of issues that an artist could / had to face. Also is delineated the figure of the “collector”, ready to run into an adventure, crossing “with curiosity, research, studies”, manifests itself as “a hunt, a form of game, even gambling … a challenge, a courtship, a conquest”.

Best to promote the hospitality and the welcome given to travelers who visit Osimo, B&B Montegallo Osimo offers a reduction of 2€ on the full ticket to the exhibition and a 50% discount on the ticket to visit the Cantinone’s Caves in Osimo.The guest, presenting the cash voucher which will be affixed to the operator’s stamp plans can have the reductions said before.

Do you want to visit the exhibition and taking advantage of the discount reserved to the guests of the B&B Montegallo of osimo?
Choose our hotel, book now for a truly unforgettable experience!
BOOK NOW!

The “Homemade Ice Cream Festival” will be held in the historical city center of Agugliano in June.

Agugliano, only a few km from the B&B Montegallo, is a scenic medieval village on the green hills of Ancona province, in the Marche.

The event, now in its fourth year, aims to enhance the true homemade ice cream, starting from the manufacturing process by which the ancient craft has been handed down.

The “Homemade Ice Cream Festival” is dedicated to professionals and industry experts, nutritionists as well as the sweet tooths!

The event can provide to all the participants from all over Italy the opportunity to spend a pleasant vacation staying in our bed & breakfast!

Would you like to attend the event “Home-made Ice Cream Festival” and stay in Agugliano?
Choose our Bed&breakfast, book now for a truly unforgettable stay!
BOOK NOW!!